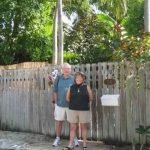 The six-foot stockade fence was old and decrepit. 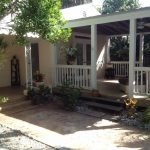 The 420-square-foot, covered porch is a wonderful space, but wasn’t architecturally incorporated into the main house. 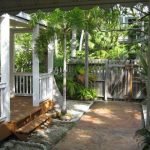 This view looking toward the stockade fence is taken from the aluminum-awning covered front stoop that will become the new kitchen. 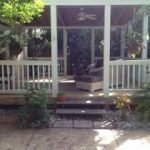 Original front porch. It was nice but lacked style and privacy.

The house had the seven things on the top of our home buyers’ wish list: two bedrooms, two bathrooms, a pool, central air, off-street parking, enough outdoor space to buffer the neighbors and a great location in The Meadows.

We bought bank-owned 1310 Olivia St., Key West, in August 2008, just as the local real estate market went into free-fall after five years of insane speculation, flipping and fantasy pricing. Though the bottom came three years later, we purchased the property for about 50 percent of what it had been listed for two years earlier.

We saw potential in the nondescript, personality-deprived, concrete block rectangle built in 1953, but it needed some serious “lipstick” if it were to come into its own. Previous owners had tacked on porches and decks with little thought for architecture and design.

The house inside and out was a hodgepodge. For sure, it wasn’t the quintessential Key West cottage, nor did it want to be. Arts and Crafts bungalow? Maybe. Florida mid-century modern? Possibly. It was a blank slate and the bones were there.

Working with local architect Matthew Stratton, we spent three years developing the plans. We had full-time tenants in the house until we permanently relocated from Rockford, IL, to Key West in mid-2012. Demolition and construction of the project began Dec. 26, 2012.

These were our goals:

(1) Get the fundamentals right. That meant bringing electric, plumbing, foundations and mechanics up to code. Sixty years of wear-and-tear, surreptitious DIY projects and lack of professional maintenance had taken their toll.

(2) Develop an overall architectural style that would weave together the inside and outside hodgepodge into a seamless design;

(3) Do it right. That meant getting Historic Architecture Review Committee (HARC) approval and following to the letter the city codes.

This was our design philosophy:

A Frank Lloyd Wright-inspired, retro-modern-bungalow that meshes with the historic Meadows neighborhood and incorporates a pinch of Zen and a hint of the prairie.