Where the heck IS Key West? 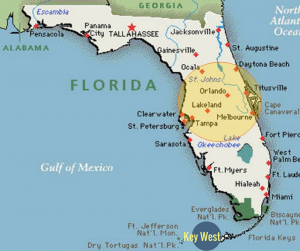 Where is Key West? Thought a little geography lesson might be helpful. See that blue dot down at the bottom? That’s Key West. Our island is 163.8 miles southwest of Miami. Tampa on the west coast is closer to Melbourne on the east coast (145 miles) than Key West is to Miami.

Even in monster hurricane language our 163.8 miles is a long way. Folks forget (or don’t know) just how far out in the Atlantic Key West is. The island is also on higher ground (relatively speaking) than the middle and upper Keys and the southern tip of Florida.

That’s why we monitor this storm differently. Just because a forecast says the hurricane is coming ashore in Miami doesn’t mean Key West takes a direct hit. It’s not much, but it’s a bit of breathing room and it affects decisions we make.