Internet trolls are like Key West iguanas. Not even Hurricane Irma kills ’em.

You knew it was going to happen. After the adrenaline surge of that pounding storm; after we confirmed Key West was (sorta) OK; after we wore out our welcome with our evacuation partners; after all that we’re just fed up. Irritable. Frustrated. Belligerent and ready to pick a fight. 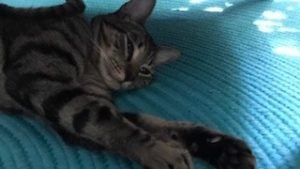 Michael, or Mickey, or Mr. Mike, is our baby. He just turned one in August. We bottle fed him from four days old.

Where better to pick that fight than on the interwebbies? I noticed the belligerence escalating early Wednesday morning as those who evacuated started getting testy over not being allowed to come home. Some are copying-and-pasting a letter to Gov. Rick Scott demanding that he force Key West and Monroe County officials to let them back in. A few are shouting in capital letters along the lines of how “no one will ever evacuate again” and “off with their heads.”

Others are taking to broadsiding the national media — with some significant justification I agree — for grossly inaccurate, clickbait headlines and reporting that clearly don’t have a clue where Key West is. I admit to posting this comment this morning on my personal Facebook Page: “I just read a romanticized purple prose piece from the NYTimes that pretty much made me gag my cheerios. And I love and respect the NYT, but gheesh….”

And then there are the bottom feeders prepped and ready to scam you with clever ways to part you and your money. (Unsolicited advice: Call your insurance agent. Call FEMA. Send money only to the charities you know personally. Do not under any circumstances connect yourself with websites and emails that promise to do it for you no matter how caring they sound.) 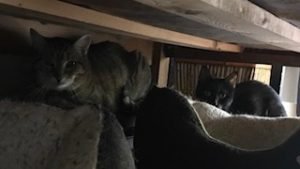 Under the bed in their personal kingdom. The favorite place for Molly and Sarah. We call them the “old girls.”

In short, nothing unexpected. John Teets and I have spent a good chunk of Wednesday playing whack-a-mole on our Facebook Page with trolls and bottom feeders — and trying to gently work with real folks stunned at the magnitude of what Irma did to their Key West lives. We’ve both been in the news business for decades, so we know this is normal; we know it’s likely to get worse and we know it will pass. A week or two down the calendar and frustration, anger and irritability over the inability to control our lives will become determination to get things done and get back to normal.

With that said, let’s do a quick roundup of what we know, what we don’t and what we think we know.

Starting with the big one: Today was the day cell service returned to Key West. OK, so it’s not great. But it’s there. I actually got a couple emails, photos and text messages from my husband and the Cat 5s. He was sitting in the parking lot behind new City Hall where the city has set up a temporary cell phone tower. Pass the word. There are still a couple of parking places left.

Know, don’t know, think we know. All mixed together

Livvy — short for Olivia, the street on which we live — is one huge cat. She’s one of “the twins.”

The “what we know” updates demonstrate the frustrating challenges the first responders and emergency crews are facing — from an unauthorized landing of a well-intentioned, but wholly dangerous supply helicopter landing at Sears Town to a fire on Stock Island and challenges with electric repairs.

Electric service has increased to 10 percent in Key West and the Lower Keys and there were problems with work in Marathon that created delays. While progress is expected on Thursday, let’s do a reality check: Turning on your lights, much less your air conditioner and pool pump, is days away. I’d say weeks, but I’ve watched these specialists who do storm duty work miracles.

Water: FKAA is gaining on the leaks along the system. While the main line appears to be holding, all those uprooted trees have damaged feeder lines, creating what must feel like endless repairs. Like whack-a-mole for water as repair crews attempt to locate and fix leaks on private property and feeder lines.

No fuel, food, water and ice: For all us clamouring to come home, know this. There are significant shortages of food, fuel, water and ice for the emergency crews and their equipment. I get it. I want to go home, too, but let’s get a grip, my friends. That stuff belongs to the men and women who are going to save our little piece of paradise. There’s not enough for us and them, too. More fuel is on the way, as are other supplies. But again, not for us. For them. 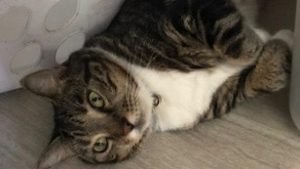 Jersey is Livvy’s twin and litter mate. The only way we tell them apart is with colored collars — and Jersey has rosebud lips.

No. You’re not coming home. No you’re not going to get to take your vacation next week. No determination has been made when locals can come back to Key West. The best estimates remain seven-to-10 days; middle- to end-of-next week. There are too many people on the island right now for the available supplies (and, yes, my husband is one of them.) I wish to heaven I knew a date so I could plan a homecoming. But, as my beloved grandmother, Pansy Grist, used to say: “If wishes were horses, beggars would ride.”

Finally, contact with my husband, Ed. He filled me in on his ‘cane-stay-cation and shared a bit of what life’s like on the island. He also shared his grief over the destruction at Fort Zachary Taylor, where he works as a park ranger. You also can check out those details on the Facebook Page.

Thought you might enjoy reading a column posted today on Huffington Post and written by a Key West resident. One of the many folks following our Facebook Page shared it with me. Called a “Love Letter to Key West,” it is written by  Lara Lillibridge and is a poignant and powerful reminder of why we each have our own love affairs with this island. Here’s a short bio, so you don’t have to go clicking around for it. “Lara Lillibridge is a graduate of West Virginia Wesleyan College’s MFA program in Creative Nonfiction. In 2016 she won Slippery Elm Literary Journal’s Prose Contest, and also The American Literary Review’s Contest in Nonfiction. … Lara’s memoir will debut in Fall of 2017 with SkyHorse Publishing. She is currently a co-editor for an anthology of women’s voices entitled, Memoirs of the Feminine Divine: Voices of Power and Invisibility.”

Oh, and the Cat 5s: All are OK. A bit traumatized but recovering. The first pictures Ed sent me today were at my request: The Cat 5s. So for those who haven’t met them, here they are. Ed says it’s so hot they just want to lie around in cool places like under the bed and on the back porch. Not the best pictures, but they’re our babies, so we think they’re beautiful. I know. I know. Crazy cat people.

And, with that, my friends, John and I call it a good day’s work. Be kind to yourself and to others. We have a swamp of unpleasant tasks ahead. Best we tackle them together. As my dad reminded his five kids regularly when we’d complain of some hardship or pain: This, too, shall pass.

Linda Grist Cunningham is editor and proprietor of KeyWestWatch Media. She and her husband, Ed, who is a Fort Zach park ranger, live in The Meadows of Key West with their Cat 5s.